Sweden Without a Trade Union Movement: A Counterfactual Analysis

The Swedish labour market is characterized by its strong social partners. Within the Swedish model – or Nordic model as it’s also known – trade unions and employer organisations jointly agree on how the labour market should be constituted. In other countries, this is often regulated through legislation, or not at all. But in Sweden, as well as in other countries, the union density is in decline (see Figure 1). In one of Futurion’s previous reports Vad är grejen med facket? (What’s The Deal With Trade Unions?), we emphasized that strong unions not only contribute to better conditions for employees, but also to strengthening democratic factors and economic prosperity. 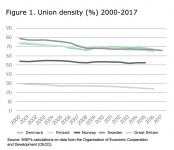 This report takes a closer look at the latter factor – the correlation between union density and some key indicators in the economy. To gain a better understanding of the impact of trade unions Futurion commissioned WSP, a professional services and analytics firm, to conduct a counterfactual study of what Sweden would look like if there never had been a trade union movement here. A stylized calculation examines how this would have affected wages, income distribution, productivity and the employment rate in Sweden.

The full report is only available in Swedish, but below you can read some excerpts which have been divided into five sections: (1) Wage Share, (2) Wage and Income Distribution, (3) Productivity, (4) Employment, and, finally (5) The Counterfactual Analysis. The results from this study was also published in the journal Social Europe.

The added value of what is produced in an economy can be divided into two parts – a wage share and a profit share. The wage share is the proportion of the value that is allocated to the workers as wage. The profit share, conversely, is the share of the value that goes to the owners of capital. In economics, there was a long-standing belief that the ratio between the wage and profit share was constant – that workers and capital were always compensated according to the value they added in the production process. This relationship held for a long time. Although, since the 1980s, the theory was challenged, while economist at the same time started to observe a drop in wage share throughout most developed economies. Sweden was no exception (see Figure 2). 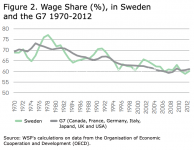 What affects the wage and profit share? Among other things, the capital intensity. That is, how much real capital is available in the economy respecting other factors of production and the size of production. Hence, the relationship between labour and capital must be analysed to see whether they are complimentary or if capital can substitute labour. If workers can be replaced with capital, that is, whether production processes can be automated, it leads to an increased valuation of capital. Subsequently, the profit share increases. If labour and capital instead are complementary, higher levels of investment lead to an increased demand for labour. But following that many studies, since the 1980s, indicate that capital increasingly can replace labour, the demand for labour decreases as capital intensity increases.

The impact of trade unions on the wage share can perhaps be explained by examining the bargaining power of the unions. If a trade union demand high wage increases, companies can respond by replacing labour with capital, assuming this is reasonable. In such cases, a low impact of the trade union on the wage share can be expected. Then, a trade union’s demand for wage increases is likely reduced, as it risks leading to increased unemployment. If instead, capital and labour are complementary, that is, labour has a relatively more prominent role in the production process, the union is likely to demand higher wage-increases, leading, in turn, to a rise in the wage share.

The Percentage Impact of The Union Density on The Wage Share

The literature examined in this study shows, on the aggregate, that a one per cent increase in the union density is correlated with an increase of between 0.11 and 0.16 per cent in the wage share (the different values depends on how the average is calculated).

Most studies reviewed indicate that trade union density has a positive impact on the equality of income distribution, i.e. income is spread more evenly among the people in the economy. However, pinpointing the size of that effect is not easily done. The reason for this is partly due to the fact that the rate of union density varying with the size of the public sector and social expenditures, such as the size of educational expenditure, for example. In addition to this, in many countries, the trade union movements have long lobbied for progressive tax systems and extensive welfare systems. In turn, these policies may incline the affected groups to claim increased salaries and redistribution of income.

However, as previously mentioned, economic inequality has increased in Sweden and other developed economies since the 1980s. A common measurement of the wealth distribution, within a nation, is the Gini coefficient (also known as the Gini index or Gini ratio). It is used to estimate the income inequality and varies between 0, which marks a perfectly equal distribution of income, and 1, which marks a perfectly unequal distribution of income. In the 1980s, Sweden had a Gini coefficient of 0.2, while until 2017 it had increased to 0.28 (0.32 if income from capital is included).

What Is The Reason For The Increased Wage Spread?

The economic literature explains the increased distribution of income by pointing to the liberalisation of financial markets, reduced tax on capital income and reduced marginal taxes on wage income. But it is also linked to the factors that were previously raised, such as globalization, technological development and an ongoing structural transformation in the labour market.

In conclusion, the union movement seems to affect the wage structure towards compressed wages. This leads to higher and more equal wages for a majority of wage earners but it also leads to lower wages for wage earners at the top of the income distribution.

What is the impact of the union density on productivity? The question may seem simple, but productivity is a complex measurement which is influenced by multiple factors which, in turn, affect each other. The covariance between the factors also makes it hard to isolate the effect.

As shown in section 1, there is a positive relationship between union density and wage share. This could lead to lower levels of investments as the aggregated return of capital decreases, this could harm productivity.

The Effect of Union Density on Productivity

The literature reviewed did not give a coherent indication of whether the union density has a negative or positive effect on productivity. Summarized, the studies indicate a neutral effect. The negative effect of lower capital investment is probably offset by lower staff turnover and greater employee engagement.

Albeit a bit simplified, collectively negotiated wages above the added value of the least productive workers could be thought of as a socio-economic cost in terms of higher unemployment than it would otherwise be. But such a statement would be based in an assumption that trade unions are only after wage-maximization, without taking other consequences into account. Such a statement, furthermore, would also be based on the assumptions that trade unions would simply hand this responsibility over to employers. In practice, however, the unions are most likely acknowledging how their bargaining is affecting the level of unemployment, which means that the size of that effect depends on to which extent the unions take this into account during the wage formation.

The Percentage Effect of Union Density on Employment

To assess the overall effect of the union density’s impact on employment, WSP went through studies of panel data from other countries (see Table 1). Together, these shows that a one per cent increase in union density is associated with an increase in unemployment of 0.03 to 0.04 per cent. However, recently published studies indicate a smaller effect than earlier studies does. This is probably because more recent studies employ more reliable statistical methods which account for variance in the degree of centralization during the wage-setting process.

How would Sweden look like if there was never a trade union movement here? As previously emphasized, this is a rather complex issue.
The economic factors we have chosen to focus on – wage share, income distribution, productivity and employment – are in themselves influenced by several factors that in turn depend on the union density. Generally, countries with a low union density are more market-oriented in other respects as well, and in practice, a strong trade union movement can have major impacts on politics. This makes the task of painting a picture of how Sweden would look like if there had never been a trade union movement here quite challenging.

The reason for this becomes clearer by a closer investigation of the Nordic countries. Here, the social-democratic government holdings have facilitated the political influence of the trade union movements as well, increasing the value of a trade union membership. This, in turn, has led to laws being adapted which benefits trade union functions. In this way, a self-reinforcing dynamic is created in the interaction between the rate of union density, or size of the trade union movement, and the choice of economic- and social model.

Hence, to describe a Sweden without a trade union movement, as is attempted in this counterfactual analysis, therefore, at large seems to be to take on the task of picturing a radically different Sweden than the country we are used to today.  In the calculations conducted by WSP, therefore, the task was simplified by disregarding the more indirect political influence of the trade union movement. Instead, the stylized calculations focus solely on the trade union’s direct effects on wage setting and employment. The calculations thus disregard the trade union’s possible impact on the scope of the public sector, i.e. the size of the welfare state and design of tax systems.

What Would Be the Economic Consequences?

As previously stated, the trade union has a large impact on wage share and income distribution (see Table 1 for an overview). Based on the reviewed studies, WSP made the assumption that nine out of ten wage earners would see their incomes decrease. An average-income household (belonging in the 5th and 6th decile) is estimated to have their annual disposable income reduced by approximately SEK 35,000 (€3,200) (expressed in terms of consumption units and with the negative employment effects excluded). 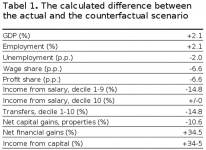 In percentage terms, 90 per cent of employees would see their disposable income decrease by between 13 and 15 per cent. In 2018, the average annual salary income was SEK 415,200 according to Statistics Sweden (SCB). This would mean a lost annual income of between SEK 53,000-62,000, for the average wage earner. That is, around €440 less per month.

The calculations show that only the 10th decile, the 10 per cent of households which has the highest incomes would meet increased wages if there was no trade union movement. The effect of this is estimated to 11 per cent, which corresponds to an increase of SEK 80,000 (€7,300), per year and households. But it should also be pointed out that the spread is great also within the 10th decile. More than half of the total capital income would go to the richest percentage of the population, as capital income represents a large proportion of their total income. In this counterfactual scenario, the households in the 100th percentile would receive an average premium on their disposable income of about SEK 400,000 (€37,000) per year.

In conclusion, the counterfactual analysis indicates that a Sweden without a trade union movement would be characterized by lower wages for low- and middle-income earners, a slightly lower unemployment rate, a level of productivity that would likely be around the same, and higher capital incomes.